The Silver Birch and The Aspen Tree 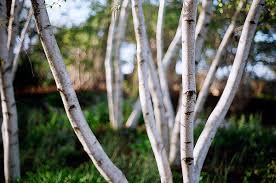 ‘The lady of the woods’ as Coleridge called this tree, the silver birch is one of our most graceful trees. Yet it is remarkably hardy too. One of the earliest trees to bud it turns a lovely yellow in autumn, but the delicate markings on its trunk & peeling bark attract most attention & give it its folk names – paper tree, white birch, written tree.

Medieval people made little distinction between it & its very close cousin the common birch. From Pre-historic times candles/brands were made of the rolled strips of bark, but its most common use was for brushes & switches for cattle & men. As John Evelyn remarked, …‘its twigs are used for Beesoms & Rods the one for the clenely Huswif to sweep down Cobwebs, the other for the magisterial Paedagogue to drive the Colt out of the Boy’.

But its dedication to Frigg the Viking goddess of mirth also gave it happier associations. Wreaths of silver birch & roses were hung over farmyard gates to celebrate the summer solstice & the white birch was frequently chosen as the Maypole or boughs were used to decorate the church at Rogationtide & Ascension Day. It has few local folk names, as the beorc/birch became a word universally used.

This native broadleaf tree has delicate leaves that are copper-coloured in bud, grey-green in summer & a lovely yellow in autumn. The petioles (stems) are long & flat so the leaves flutter in the least whisper of air.  They tremble even when there is no wind so earnt the folk-name, ‘old wives’ tongues’. In 1597 John Gerard wrote in his Herbal, ‘In England the Aspentree may also be called the Trembletree…it is the matter whereof women’s toongs were made, which seldom cease wagging…’ In the south-west it is called the asp; in Sussex the aps; in the Midlands the quaking ash, snapsen or pipple, the diminutive for poplar.

The timber is light weight so had few uses except as a bark infusion to treat shingles or to make light-weight objects like woven baskets. To some it was a cursed tree as they believed the Cross had been made from it, so that ever after the trees shake with shame & sorrow. A lovely tree indeed, but do not plant it in your garden as the suckers are numerous & can come up as much as 40 feet from the mother tree!