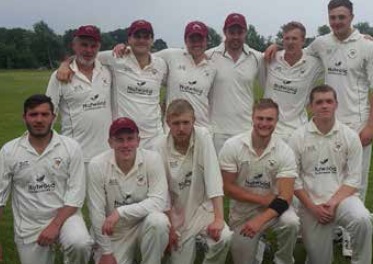 Big win for Salthill after tricky start. An overcast afternoon and a bowler friendly wicket at the Fishbourne Centre, home of Salthill CC and Peterfield II. Petersfield won the toss and put Salthill in to bat and it looked to be the correct decision when both openers were removed cheaply with E Bayliss taking both wickets. Scot Richardson and Nick Bishop steadied the ship however taking Salthill for 7-2 to 66-3 when Richardson was dismissed for 21. Bishop continued what he started with Rupert Fisk joining him both scoring at quick rates to finish on 44 and 43 respectively. Then Salthill’s batting wobbled losing the next 3 wickets for 6 leaving Salthill on 147-7. However the tail end contributed to another 54 runs for the loss of 2 wickets as Salthill finished on 195-9. Petersfield II’s battling started strong with C Salmon and D Squires making a 27 run partnership. However James Cox made the vital breakthrough in the 8th over, bowling Squires on the wicket that was offering plenty for the bowlers. Captain Ashley Court delivered very tight bowling at the other end, bowling 3 maidens and a double wicket maiden in 7 overs before finishing on 2-21 leaving Petersfield II on 27-3 in the 9th over. With Salthill’s opening bowlers exposing the Petersfield II’s middle order, Steve King and Ryan Dawntry continued where Court and Cox had left off, taking 3-38 and 3-3 respectively. R Dawntry’s figures of 3-3 was a very impressive start to his senior cricket figures, turning 18 on the day of the game. With Petersfield II’s on 89-9, Jack Hardman came on to see the game off taking the final wicket with his 3rd ball to complete an impressive win for Salthill CC. Salthill have now played 4 league games, winning 3 of them, as they look for a top half finish after promotion last season.